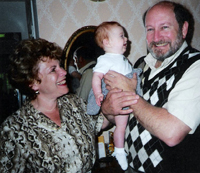 As Marilyn outlined the form that the Foundation was to take, she summarized her vision in this letter sent to all members. We share this with you to help convey the guiding principles behind the Foundation, and the deep philanthropic mission behind everything we do.

To the members of the Marilyn S. Broad Foundation:

As I sit, trying to devise an estate plan, I am forced to ponder my life and the legacy I wish to leave. I could simply gift large amounts of money to carefully selected charities of my choice. Sure it would be simple and quick, but it would not accomplish my true objectives.

My first objective is to give back to the world, in areas I care most about, some of the incredible good fortune I’ve had. The second is to involve the family in the gifting process and foster the philanthropic feeling that inspired me throughout my life. I want all of you to feel the responsibility of choosing and the joy of the difference your decisions can make. I hope it makes everyone involved feel truly proud of him/herself. The final objective is to provide each of you with the opportunity to create your own philanthropic endeavors, allowing you to continue the act of giving throughout your lifetime and generations to come.

One of my favorite quotes is: “Money is an opportunity to make dreams come true.” I would have added, “…and put an end to the nightmares that a lack of it can cause.” I have seen the destruction that poverty and a lack of education inflict on people. I am providing you with the tools to help those in need. While there are many societal ailments that require attention and monetary relief, I have focused my efforts on addressing three primary areas: education, healthcare, and poverty.

Most of my life I’ve had a profound sense of how lucky I am. Despite the hardships I faced in growing up in a post-World War II home, I lived in a country where it was possible to be successful beyond my wildest dreams. I don’t just mean financial success. I mean the chance to learn, grow, gain confidence and rise to a position of real impact and influence in an area that I loved. I worry that it’s harder for young people to do that today. Credentials count more.

I’m convinced that no one gets anywhere solely on his own. No matter how driven to succeed, there often are people who enable the effort. I want this Foundation to be an Enabler. My life has been blessed with many Enablers who showed up at critical forks in the road and convinced me, through their actions and/or material help, that I could do it.
I wonder what happens to kids who aren’t born into families like ours. Who makes their dreams come true? What fuels their optimism? And, do they ever get to feel the unbridled joy I’ve felt in being able to gift back to the people whose loving support has enabled my getting where I am?

There was a man in New York City who felt, as I do, that you have to believe you have a chance to win before you’ll make the all-out, heroic effort it often takes. So he asked the Board of Education to uncover the names of the very smartest kids in the very poorest neighborhoods. While these kids all tested very highly on standardized tests, most were barely scraping by with a C average or less.

He went to those kids and promised them, in writing, a full four-year college scholarship if they graduated high school with a strong grade point average and were accepted into a top college. These children rose to the task and went on to very successful college careers. Suddenly, they no longer felt that being Black or poor or from uneducated parents made college a pipe dream. And when they truly believed that their efforts would matter, they made the effort.

Again, I tell this story NOT to prescribe what you do but because I like this story at a concept level. Relatively small amounts of money made a huge difference.

In this country, and certainly in most of the world, the quality of health care you get is directly related to how much money (and information) you have. Throughout Africa, for example, I sat across lunch tables with talented young African professionals who worked in our Mobil affiliates. Most had lost family members to AIDS. All had stories of the greatest tragedy: the toll on children. In Kenya, Tanzania, Zimbabwe and Johannesburg, the story was the same. I was proud that the Mobil medical departments in these countries had dispensed free condoms. I wished we could do more.

Closer to home, there all too many examples of how the combination of a lack of information and a lack of money make life and death differences in peoples’ lives. I’ve often thought about the November ’96 Mammogram that detected my otherwise undetectable early cancer. My insurance didn’t cover the test, although it is far less expensive than covering treatment of a late-stage disease. Had I been one of the mothers who have to choose between feeding her children and getting the test, I might well have died years ago. I imagined what life would be like being a family of four on a modest income and having to come up with $32,000 in co-payments in 7 months.

My interests go well beyond cancer but instead to all the other diseases that have a similar impact on peoples’ lives. I have a special place in my heart for children and have long supported programs like St. Jude Children’s Research Hospital. I don’t know what I would do with the Foundation’s money if the decision were mine but I do know that helping in a way that addresses the inequities would be a worthy objective.

What goes around comes around. The cycle of success can be as real as the cycle of poverty.

The type of poverty that drove my generation to be “hungry” to succeed is no longer a key driver. The belief that one can rise from nothing to great success is missing for large segments of the population. As a result, many don’t even try. The lack of empowerment is debilitating.

Housing has a lot to do with self-esteem, security and optimism. Studies in the early days of the Civil Rights Movement showed that children who lived in a house had a better opportunity of succeeding than similar children who received similar scholarships but lived in an untenable situation. One of my very early assignments with Mobil was to go to Bedford Stuyvesant, at the height of racial unrest, to see the Bedford Stuyvesant Restoration project and determine how Mobil could contribute and hire some of its residents.

The Kennedy family, among others, was behind this effort to employ community residents to fix up housing that had deteriorated to an uninhabitable state. These home were then sold at affordable prices to local residents. The approach was simple but brilliant. Children immediately stopped spray-painting obscenities on walls. Neighbors were helping each other plant small gardens. People had the double joy of a paycheck and the pride of what they had done for their neighborhood.

And all this happened at a time when ignorant people outside the area were saying things like, “That’s how those people want to live.” No one wants to live that way. I remember my Mother’s excitement when Leavitt was selling houses for $10,990. The GI Bill allowed us to buy a home with something like $100 down. We were given the opportunity to start over. We could live like other people. It was the rebirth of optimism.

I hope you will use this foundation to give others the optimism and opportunities needed to survive in this world. You have the tools to change not just one person’s lives, but the lives of the generations to follow.

Now you know the reasons why I established a Foundation and the areas in which I would like you to focus. I hope I’ve succeeded in establishing a framework for the foundation without being prescriptive about which specific organizations or people who should receive grants. You and your Board of Directors need to own all of the decisions.

The spirit of philanthropy is empowering. I hope that you will all take the responsibility, and the opportunities, that are derived by having the funds that permit you to materially effect other people’s lives

All my love,
Marilyn